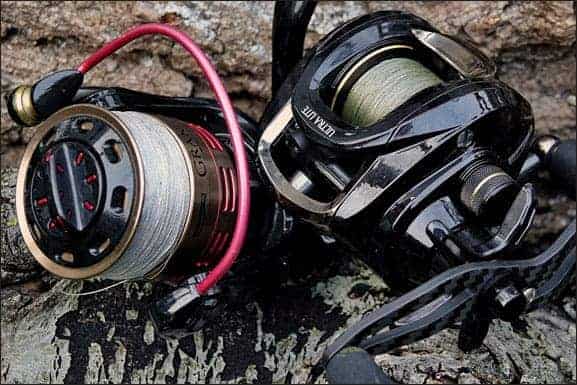 While there are different fishing reels to choose from, there are mainly two type of fishing reels used for northern pike fishing. Spinning reels and bait casting reels. Which is preferred for Northern Pike fishing? Let’s explore the pros and cons of each.

Spinning reels are the most popular reels used among fishermen. This is due to the ease of use a spinning reel provides, which allows a novice fisherman to be proficient quickly. As you become more comfortable with a spinning reel you will be able to achieve longer casts with a variety of lures.

Bait casting reels are used by more experience fishermen as a bait caster gives you better control and longer casts with more accuracy. A bait caster also gives you more power to control a trophy northern pike, along with the ability to cast heavy lures with ease.

Issues with using a bait caster for northern pike fishing. Bait casters have a long learning curve, requires a lot of practice to become proficient, backlashes frequently if not setup properly with the bait you are using, and bait casters are limited to weighted lures.

Which reel should I buy for northern pike fishing? There is a clear difference between a spinning reel and bait casting reel that makes the bait caster the ideal reel for northern pike fishing. The ability to cast accurately, use heavier lures, ability to spool heavier line weight, and having the power to control a larger pike makes the bait caster the clear choice. Now with that said, a bait caster comes the long learning curve and if you are not willing to put in the time to practice and master the bait caster, you will be better served using a spinning reel. The loss fishing time while dealing with backlashes far out weighs the limited line capacity, lower lure weights, and accuracy of the spinning reel.

Cobham River Fishing Report August 28, 2022 It’s sadly finally upon us – Cobham River’s last guests of the 2022 season! After a little not-so-user-friendly weather and a barometric pressure drop that slowed ...

Cobham River Fishing Report August 22, 2022 Days are getting shorter and there’s finally a chill in the morning air here at Cobham River Lodge heading towards September. After surviving last week’s ...