At the beginning of our northern pike fishing season the ice begins to break up in May and offers mother nature a chance to warm our fringed Canada waters.  This in turn brings life to our Manitoba bays as warmer water brings smaller fish to feed.  In turn the larger northern pike also begin to feed in the shallows of our Manitoba bays.

As the smaller fish begin to move, by early July bigger northern pike also move.  The cabbage weeds have now spread deeper the bigger female northern pike also seeking deeper cooler waters as they await their prey at the bottom edge of the weed line in 121 – 143 cm (4 – 8 ft.).

By mid July, trophy northern pike begin to spread throughout our Manitoba river system to the drop offs along rocky Canadian shoreline, weedy points, deep river channels and sheltered Manitoba bays that offer drop points with shaded water to give northern pike the cover needed as they hunt for prey.

Early August is upon us and the warmer weather pushes our trophy northern pike even deeper along the weed lines (182 – 365 cm, 6 – 12 ft.). As the warmer climate raises the temperature of our Canadian waters,  the northern pike become less aggressive and some what lazy during this period.  Smaller fish are still in the shallows and we look for these pockets to entice a larger northern pike to strike.

Towards the end of August the trophy northern pike are back into the shallows to feed on small fish and anything else dropped in their path. As in mid September the water turns and feeding frenzy is over, as winter is just around the corner. 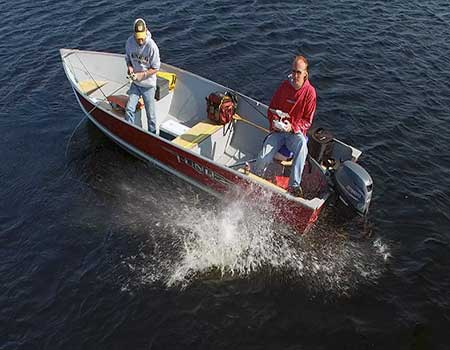 Can’t make it happen this year, join our waiting list and get the date and trophy you’re after next year.

When you compare other fly in fishing lodges you’ll be hard pressed to hear them mention a waiting list or that they are sold out. The reason is simple, we have the best trophy Northern Pike fishing in Manitoba. While other Manitoba fishing lodges have up to 18 boats firing off the dock each morning, we limit our 76,000 acres to 5 or 6 boats. The result is the best fly in Northern Pike fishing in Manitoba, but only for the select few. After 45 years in business this has resulted in “Sold out” and “Join our waiting list” being common place.

Get on the list and be one of the boats going out next year. We’d love to meet you and your group.

What sets the stage for June northern pike fishing in Manitoba Canada is three factors:

In early June, Canadian northern pike fishing is generally in the back shallows of the Manitoba bays. Canada fishermen will find trophy northern pike enjoying the warmer waters in the shallow 24 – 45cm (8 – 18 inches) waters.  It is not uncommon to see 3 or more trophy size northern pike in the same clear water bay in early-mid June as cabbage weed growth is still at a minimum.

As we move through June, water temperatures rise as does the cabbage weeds in our Manitoba bays.  As the weed line move, so does the northern pike fishing change from the shallow Manitoba bays to the deeper weed line depth (60 – 121 cm, 2 – 4 ft.).  Mid to late June, northern Pike males are move active and can be caught almost anywhere on anything in the system.

As we transition into July, so too does the northern pike fishing locations.  July brings full weed beds with cabbage weed patches scattered throughout our Manitoba river system.  This growth expands the northern pike hunting grounds as the northern pike move between weed beds taking up different positions along the weed edge lines looking to find a ambush point for its next meal.

Larger northern pike are usually found along the weed edge lines where the river narrows as this forces smaller fish to funnel in front of the trophy northern pike.  Drop offs and rocky reefs are also northern pike havens this time of year as they provide easy cover while waiting for their prey.

Later in August the water begins to cool rapidly as the Canada fall color season is upon us.  Our Manitoba bays begin to see their weed lines recede, causing our northern pike to leave the bays for rocky points and shoreline.  Because of the temperature change in the water, northern pike fishing picks up to mid June levels as northern pike are putting on their winter weight. Because of the winter feeding frenzy, fishermen have caught some of our biggest trophy northern pike of the season in August. 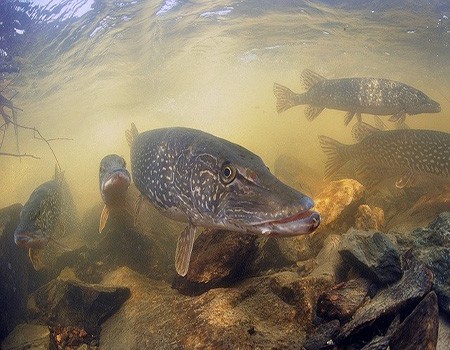 Northern Pike are the top predator on the Cobham River and Hidden Lake while being a very aggressive voracious eater that will attack almost anything that gets too close including ducklings and other pike one-third to a half their size.

Northern pike on the Cobham River tend to spawn in April or May (when water temperature first reaches about 9 °C (48 °F)). Shallow Bays are a favorite spawn location for Northern pike, where the temperatures are warmer, and the vegetation is plentiful for fertilized eggs to attach. Northern pike are capable of breeding at two years of age, and have a tendency to lay a large number of eggs (8,500 eggs per pound, in other words a 10 pound northern pike will lay on average 85,000 eggs this spring).

Within 16 days the eggs hatch into larvae which live off their egg sacks until the larvae develops to the point where they are capable of feeding themselves, at which time larvae is called fry. The fry will start swimming and feeding on planktonic while developing scales and fins, once working fins have developed the fry has transitioned to a juvenile otherwise known as a fingerling. The juvenile stage lasts until they start to interact with other adult fish.

The primary factors that allow Northern Pike to grow into full-sized monster pike are food supply and water quality. The reason we built Cobham River Lodge on the Cobham is because having two river systems (Cobham and Paulson) together provides our Northern Pike an endless supply of Walleye, Perch, White Fish, and Burbot to feed on. Both river systems pass within 1 mile of our dock which provides the most current and cleanest water.

In summary its simple, the fish need great conditions to allow for the time to grow to monster northern pike size that we are accustomed to at Cobham River Lodge. All northern pike at both Cobham River Lodge and Hidden Lake Outpost are released after reaching 26 inches. In addition to protecting our large egg laying northern pike, the Canadian Natural Resources have proven that offspring of larger females are genetically advantaged to the offspring of smaller fish.

This means our fry and juvenile pike will have lower mortality rates, longer life spans, and grow faster than those found in other waters without the natural foundation that the Cobham River and Paulson River provides to our fishermen.