I caught a trophy pike, now what?

I caught a trophy pike, now what? 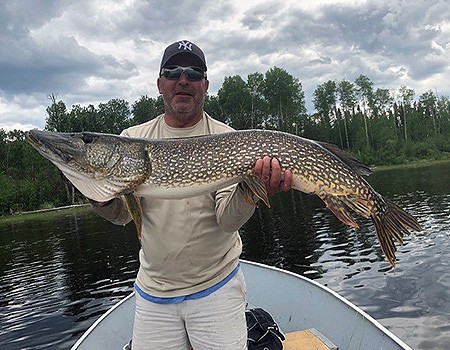 After catching a monster Northern Pike what do I do?  First off congratulations on catching the one Manitoba’s most sought-after trophies the Northern Pike. Cobham River Lodge has the best Northern Pike Fishing in Manitoba, Canada with numerous 50-inch Northern Pike recorded over the years.  This article reviews the best techniques to retrieve your hook, snap a photo of your monster pike and releasing your trophy northern pike without harm.

So, as you bring your trophy pike to the side of the boat and get ready to hoist it in, do not get too excited and follow these simple steps for safe release of your trophy catch.

Your priority is to cause as little stress as possible on the fish.  Northern Pike 32 inches and greater are 95% female and will reproduce over 100,000 eggs per season (roughly 8,500 eggs per pound on average).  The trophy pike our guests catch are also the breeding stock for future guests.  Cobham River recommends if the thrill of catching a monster pike is fulfilling and a photo of your catch is not desired, the trophy pike should never leave the water or be netted.  Play the fish as little as possible, bring her along side the boat and with a needle nose pliers remove the barbless hook and watch her swim off.

For those that cannot resist posting your trophy catch on social media (98% of our guests fall into this bracket) there are two techniques for getting that prefect photo and returning the trophy pike back to the waters unharmed.

Second to control the northern pike head, we recommend a technique called the gill-plate grab.  This allows you to control the Northern Pike head and in turn the rest of the pike’s motion as well as providing a stable holding position for your photo without doing harm to the fish.

Start by curling your fingers making a U-shape and slide you fingers under the gill plate of the trophy pike. As your fingers touch the inside of the gill plate extend the thumb parallel forward along the northern pike head. As you squeeze your fingers and thumb together you will have a firm grip to remove the barbless hook and raise the trophy pike while supporting the mid-section with your other hand and smiling for the camera in the prefect pose.  Take a quick measurement and time to return for to fight another day.

Before returning your trophy pike to the water, take a quick look at the gills and remove any blood or weeds that may exist.  Returning your trophy northern pike with material caught in its gill leads to a higher death rate that a simple review can avoid.

As you set your pike in the water hold the pike in front of its tail, in its upright position and face upstream.  At this point you are allowing the pike to revive as the water passes through the gills.  After a couple of minutes pike will begin to make small moves. At this point release the tail and it should remain upright.  If after releasing the pike it turns on its side, position your hand hold back on the front of its tail and begin to move the pike back and forth gently to allow water to move over the gills.

Once the pike remains upright it can recover on its own and will swim off eventually.

Cobham River Fishing Report August 28, 2022 It’s sadly finally upon us – Cobham River’s last guests of the 2022 season! After a little not-so-user-friendly weather and a barometric pressure drop that slowed ...

Cobham River Fishing Report August 22, 2022 Days are getting shorter and there’s finally a chill in the morning air here at Cobham River Lodge heading towards September. After surviving last week’s ...